IN THE MATTER OF

A.    On February 3, 2015, Canadian Forest Products Ltd. (Canfor) filed an application for an exemption under section 88 of the Utilities Commission Act (UCA) from regulation as a public utility under Part 3 and section 71 of the UCA in respect of the resale of electricity, supplied by British Columbia Hydro and Power Authority (BC Hydro) to Canfor’s NOS Substation at 8546 Willowcale Road in Prince George, British Columbia, to purchasers whose facilities are connected to the NOS Substation;

D.    In the future, Canfor may wish to resell electricity from its NOS Substation to other interested parties who do not wish to become BC Hydro general-service distribution customers;

E.    In a letter dated January 24, 2014, BC Hydro stated it has no objection to Canfor’s resale of electricity to the Pacific BioEnergy Corp. operation;

F.    Section 88(3) of the UCA provides that the Commission may, on conditions it considers advisable, with the advance approval of the Lieutenant Governor in Council, exempt a person, equipment or facilities from the application of all or any of the provisions of the UCA;

G.   The Commission considered the Application and is satisfied that an order, under section 88(3) of the UCA, exempting Canfor and its customers who do not resell energy, from the requirements of section 71 and Canfor for its distribution service from the NOS Substation to its customers from the requirements under Part 3, except for sections 25, 38, 42 and 43, properly conserves the public interest; and

H.    By Order in Council No. 456 dated July 27, 2015, and attached as Appendix II to this order, the Lieutenant Governor in Council granted advance approval to the Commission to exempt Canfor and its NOS Substation customers from certain provisions of the UCA for the purpose of and subject to the terms set out in the draft Commission order attached to the Order in Council.

1.       Pursuant to section 88(3) of the Utilities Commission Act, the Commission, having been granted advance approval by the Lieutenant Governor In Council, effective the date of this order:

a.       Exempts Canadian Forest Products Ltd. (Canfor) from the requirements of Part 3 of the Utilities Commission Act except for sections 25, 38, 42, and 43 for its NOS Substation distribution facilities used to supply electric service to its customers.

b.      Exempts Canfor and any person that receives energy from Canfor’s NOS Substation distribution facilities from section 71 of the Utilities Commission Act provided the person is not re-selling energy to others.

c.       The exemptions are subject to the conditions contained in directive 2.

2.       The exemptions, granted pursuant to this order, shall remain in effect until further order of the Commission for reasons that may include the determination of any complaint the Commission receives from a person whose interests are affected.

3.       Pursuant to section 43, Canfor is directed to file an annual report within 90 days after fiscal year-end covering each exempted facility containing the information set out in Appendix I or as the Commission may otherwise require.

4.       Pursuant to section 38, Canfor shall construct, operate and maintain its facilities referred to in directive 1 to ensure safe, reliable and adequate service.

A Report is required for the Canfor’s NOS Substation 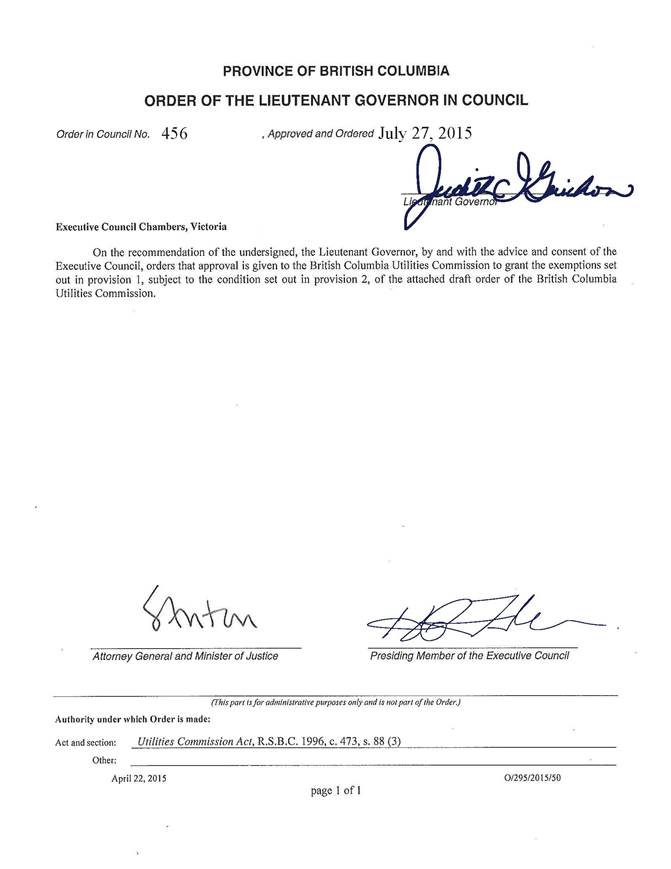 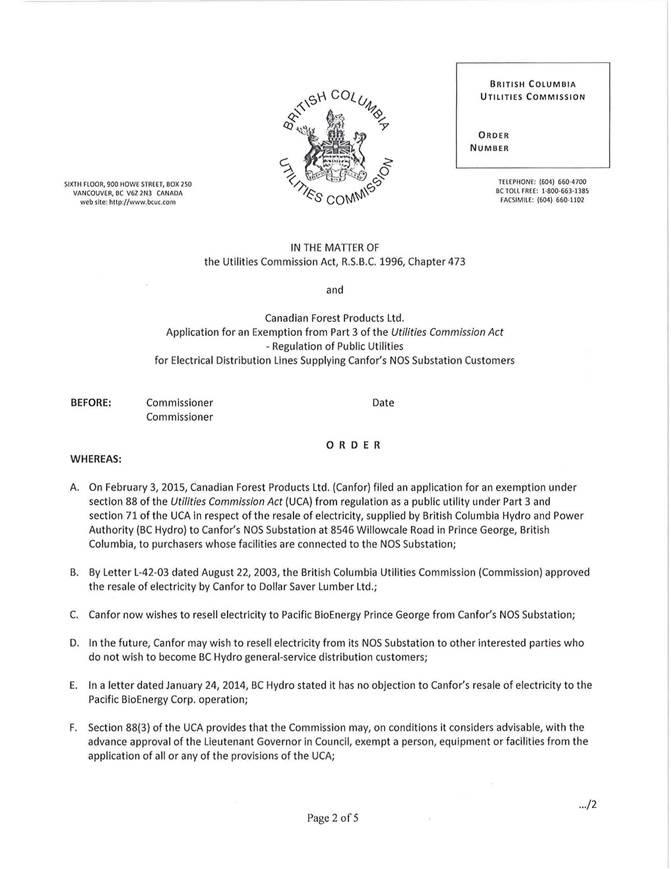 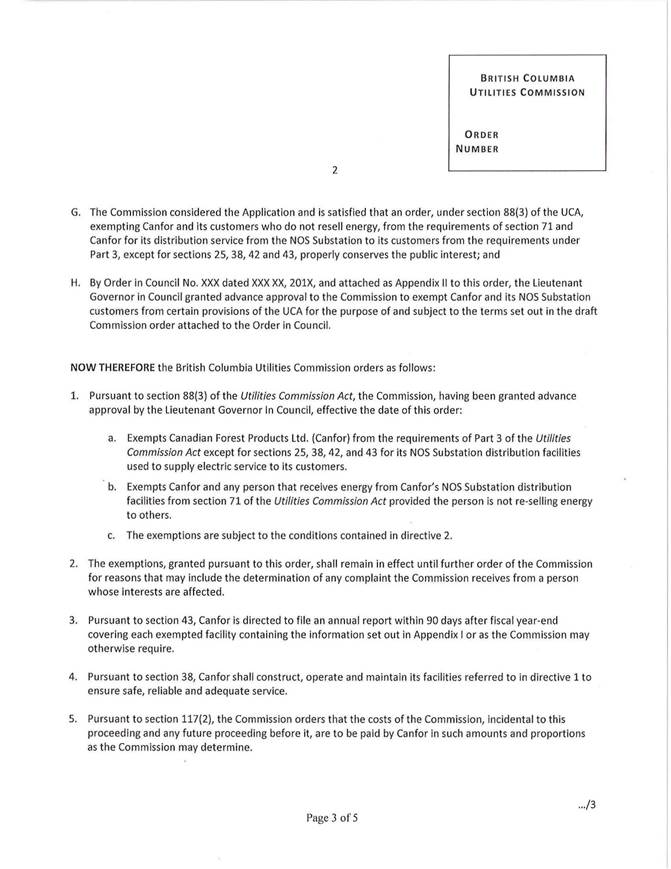 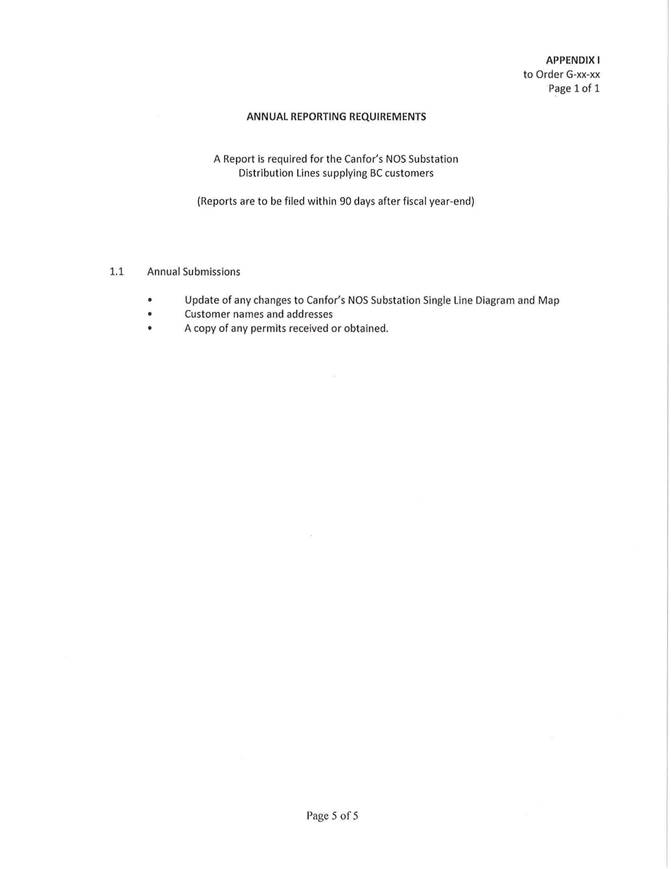 You are being directed to the most recent version of the statute which may not be the version considered at the time of the judgment.